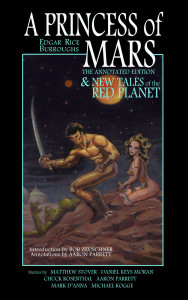 For a hundred years, the Mars novels of Edgar Rice Burroughs offered readers their first glimpse of life on the red planet.

Now join Captain Carter on his maiden voyage to Mars in what is a fully annotated and illustrated edition of the classic A Princess of Mars, with extensive notes prepared by Burroughs scholar Aaron Parrett.

And thrill to all-new adventures written in tribute by Matthew Stover (Star Wars: Revenge of the Sith), Daniel Keys Moran (The A.I. War), Chuck Rosenthal (The Heart of Mars) and more!

• “A Friend in Thark” by Matthew Stover: A “lost chapter” of A Princess of Mars about a friendship that will become legendary throughout Mars.
• “Uncle Jack” by Daniel Keys Moran: A dying man on Mars receives a guest of the most unlikely sort.
• “The Whites Apes of Iss” by Mark D’Anna: The untold story of the keeper of the atmosphere factory, and his fateful encounter with a mysterious visitor.
• “Gentleman of Virginia” by Michael Kogge: A young Southerner’s obsession with Mars leads him to volunteer for the Confederate Army.
• “Zero Mars” by Aaron Parrett: Daring young Maizy Theta risks her freedom on Mars to save the life of Hypatia, a promising mathematician on Earth.
• “An Island in the Moon” by Chuck Rosenthal: The greatest warlord of Mars returns home and discovers it has changed dramatically from the red planet he knew.

Includes a specially-prepared bibliography of Burroughs resources, an introduction by Burroughs expert Robert B. Zeuschner, and all new illustrations by Dan Parsons (Star Wars: Dawn of the Jedi comic)!